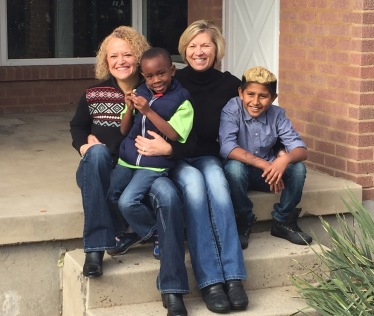 As an openly gay, married woman with two sons—young boys of color—I carry deep personal concern about what the recent Presidential election means for my family and families like ours. As mayor, I have also felt the anxiousness from many people in our City, especially from those without the relative privilege most people in Salt Lake City enjoy. I have heard stories and seen the tears of people truly concerned they will have to leave their jobs, families, and the security they have built for themselves in our City.

Since the election, the disturbing language and behavior emblematic of the campaign has—not surprisingly—moved from our screens to our schools, streets, and neighborhoods. This highly charged rhetoric, often laced with bigotry toward women, immigrants, refugees, people with disabilities, and LGBTQ people, is being reinforced as President-elect Donald Trump selects individuals to advise and lead our nation into the future.

There has been encouragement from some to “wait and see” what the next four years will bring. And while I agree, we must hold onto hope, I know from years of experience fighting for the rights of LGBTQ people and other marginalized communities, “waiting” and “hoping” are not paths to equality. Our strength comes from our struggle and our willingness to stand up for what we believe.

So, as a wife, mother and Mayor of Salt Lake City I want to reiterate my commitment to stand against all forms of oppression, and support all who live, work, or visit here. Through current and future policies and practices, Salt Lake City will remain committed to protecting the human rights of all who call this great city home.

Since the days of the pioneers, Salt Lake City has always been a place of refuge for those seeking a new or better life. Today, we are home to more than 5,000 international refugees, as well as a thriving immigrant population—people who work and pay taxes, whose children attend our schools, and who contribute so much to Salt Lake City’s cultural vibrancy. We know refugees and immigrants add strength to our community and it is our responsibility to carry on our proud tradition of being a welcoming city.

I am heartened by the many residents who, while struggling to accept recent political changes, are choosing to take positive action over resorting to anger and despair. In the past two weeks, community members have flooded our office phone lines and social media pages in response to our call for volunteers to connect with refugees who need assistance through our “Meet Your Neighbor” program. I’m grateful for this outpouring of support and desire to help new Americans in our community.

Salt Lake City will also be vigilant in upholding the practices we have in place to protect those who are new to our community. The Salt Lake City Police Department has a longstanding practice against officers inquiring about immigration status of those they come in contact with on a day to day basis. Determining a person’s immigration status is the role of federal authorities, not our local police officers. Our current practice is central to our community-policing model and will remain unchanged.

Members of Salt Lake City’s LGBTQ community can also be assured they will continue to be supported as well. Salt Lake City has led the way in enacting ordinances that affirm and protect equal rights, and promote safety. In 2009, the Salt Lake City Council passed the first city ordinance in the state, prohibiting discrimination in housing and employment based on sexual orientation. This ordinance has been modeled by other Utah cities and in non-discrimination legislation at the state level, and is just as important to us today as it was in 2009.

We recognize there are areas, including hate crime legislation, where our City and State must do more. We will continue to push for stronger legislation to protect the LGBTQ community, both at a local and state level.

Earlier this year, my budget recommendation to include costs of gender reassignment surgery in our employees’ health care plan was unanimously adopted by the City Council. Together we reaffirmed our support of equality nationwide by standing against discriminatory policies in North Carolina and Mississippi, and we are already discussing future policies to keep Salt Lake City on the forefront of equality.

Our City is also fully engaged in supporting people with disabilities and in dissolving barriers that challenge and work against them. My office employs a full-time coordinator for disability rights, who advocates with the community for full access to housing, employment, education, and for state and federal legislation that supports disability rights. Building a city for everyone includes building a city that is accessible to everyone.

As only the second female mayor in our City’s history, and as a woman who has pushed back against gender-based discrimination for decades, I want to underscore my commitment to create greater opportunities for women in leadership, administration, and city-wide employment. I have appointed several “first females” to department director positions, especially in non-traditional fields, including Public Utilities, Public Services, Sustainability, and Economic Development. They are powerful and collaborative leaders, contributing great energy to our conversations and directing policy.

Earlier this year, Salt Lake City also affirmed our support of women’s rights by passing a joint resolution in support of CEDAW, the United Nation’s Convention on the Elimination of all Forms of Discrimination Against Women. This resolution commits our City to analyzing the role of gender in our local government, and funding policies in line with the goals of CEDAW.

Finally, anticipating that changes in Washington may set back efforts to address global climate change and environmental stewardship, I want to assure residents, Salt Lake City will work even harder to clean our air, protect our canyon watersheds and surrounding environment, and follow through on our policies to make our city cleaner and greener.

Earlier this year, Salt Lake City passed one of the most aggressive energy policies in the nation, pledging to source 100 percent of Salt Lake City’s community-wide electricity needs from renewables by 2032, and pledging to reduce overall carbon emissions by 80 percent by 2040—this goal will continue. I recently signed a letter to President-elect Trump, along with mayors from around the nation, inviting him to join our sustainability efforts. As the Compact of Mayors, we also let him know, we will move forward with or without his help. Nothing is more important than the air we breathe and knowing we have as many inhalers as lunch boxes in our city schools, we do not have time to waste.

Salt Lake City is a modern, diverse, and welcoming city. I trust in our community to reach out to friends, neighbors, and stranger alike with kindness and hospitality—particularly in times of uncertainty or change.

We are all in this together. I ask everyone to join me in building a city where everyone can thrive in life and realize their dreams.

If you or someone you know has concerns about safety, or if you are interested in taking action to build a more welcoming environment, please do not hesitate to call my office at 801-535-7704 or email us at mayor@slcgov.com.